With the near win of Tom Watson at this year’s British Open, much talk arose around his age (59!) and his potential to win his 6th title at Turnberry. It reminded me of similar age x performance dialogue around then 41 year-old Dara Torres in the 2008 Beijing Olympics. Both athletes have accomplished much in their respective sports: Watson (8 major championships, 6th on the list of total major championship victories, and the oldest male golfer to almost win the British Open or any other major championship), Torres (first-ever 5 time US female Olympic swimmer, 10 medals- 4 gold, oldest female swimmer to make the Olympic Team after an 8-year hiatus). Both have accomplished feats when most opine them “too old”. Kudos! 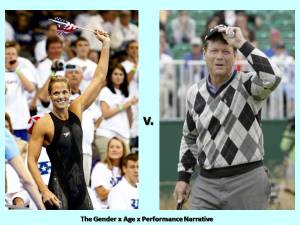 But what I find interesting is how differently the media constructs the gender x age x performance narrative of Watson and Torres. Here are a few thoughts:

1. The media portrayed that fans WANTED Watson to win and were sad when he didn’t. For Torres the message was people would be surprised if Torres won, and could claim “I knew it” when she didn’t.

2. There was nary a mention that Watson was a father (he has two biological children, and three stepchildren) during the British Open, but we heard NON-STOP that Torres was a mother of one.

3. Also missing from Watson’s British Open run was talk of if he was “competing fairly” or on performance enhancing drugs (although we did hear this drum beat about Lance Armstrong in the past, not for the 2009 Tour de France…yet. Wait until/if he wins then we can discuss.). Torres had to endure (and still does) constant questions about this issue.

4. The media was all-over Watson’s fairy tale near-win, but barely covered Torres’ 50 Free win earlier in the month at the US Swimming National Championships. With that win Torres will compete with the U.S. World Championship Team in Rome in late July-early August.

5. I did not see one picture of Tom Watson posed “sexily” and showing off his AARP body, while we did see picture after picture of Dara Torres in sexy, glammed up poses. Just type ‘Dara Torres’ into Google and hit “images” if you don’t know what I’m talking about.

The take-home messages for these common patterns in the media’s portrayals of female athletes….a near win for a man is valued more than a win for a woman; motherhood defines female athletes but fatherhood is seldom mentioned for male athletes; “old” competitive, winning female athletes are under suspicion as “cheaters” while when “old” men are in the hunt because they are hard working, talented and wily; the bodies of even “old” female athletes can be exploited and sexualized…and regardless, a male athlete’s performance will always be more media worthy than his female counterpart regardless of age. Come to think of it there are even gendered differences about how “old” is defined and constructed. “Old” for a male athlete is ~60 years while “old” for a female athlete is 40…

But don’t give up all hope…Dara Torres does have Tom Watson on one thing….she’s Got Milk?.

2 Replies to “Dara Torres v. Tom Watson: One for the Ages”