A couple years ago I did a podcast for John O’Sullivan of Changing the Game Project about youth sport, sport parent behavior research, and how to help parents be better on the sidelines. Take a listen!

Show Notes
5:00 When she became interested in issues for Women in Sport Leadership?
8:00 Why is there a decline in women in sport leadership?
15:00 What would it take to get more women coaching sports?
21:00 Why does Nicole think kids are quitting sport?
28:00 Nicole explains “background anger” and how it affects children
35:00 What is Kid Speak?
48:00 Winning and Character Development are not mutually exclusive 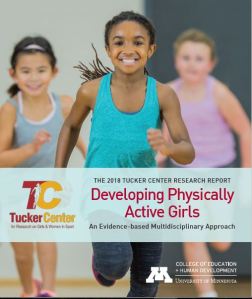 The report includes eleven chapters written by leading multidisciplinary scholars. Evidence-based chapters include psychological, sociological, and physiological dimensions of girls’ physical activity participation, as well as chapters on sports medicine and the influence of mass media of girls’ health and well-being. Because “girls” are not a singular monolithic group, chapters focus on girls’ intersectional identities and include invisible, erased, and underserved populations such as immigrant girls, girls of color, girls who identify as lesbian, transgender and queer/questioning, and girls with cognitive and physical impairments. The report ends with a Best Practices chapter and a Positive Model for Developing Physically Active Girls to guide thought, program development, interventions and research. 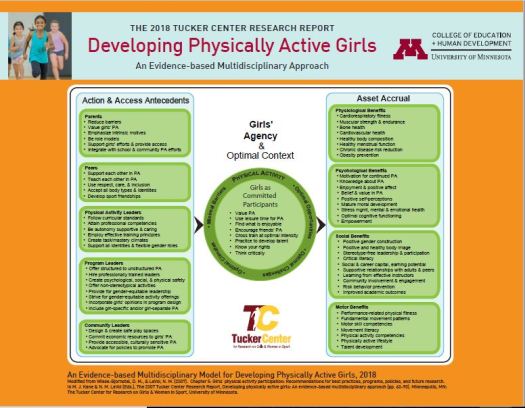 I visited Marti Erickson on MomEnough to do a second podcast on sport parents where we discussed youth sports, questioned many assumptions, called out unhelpful parental behavior and challenged parents to step up and use proven approaches to help children reap optimal benefits of organized sports. Listen to the podcast here.

My first podcast “Being a Good Sport Parent: Practical Guidance on Bringing Out the Best in Your Young Athlete” with MomEnough is here.

Recently had the privilege of talking to Erin & Marti Erickson of MomEnough.com about some of my work pertaining to youth sport parents. It was really fun and we talked about many practical tips related to being a good sport parent and how to recruit and encourage more moms to coach their children.

Listen to this 30mn radio show, you won’t be disappointed: Being a Good Sport Parent: Practical Guidance on Bringing Out the Best in Your Young Athlete

Tools, Research and Guidelines for Mother-Coaches

I am a long time advocate of late specialization-early diversification in youth sport, and this research report by the American Academy of Pediatrics “Sports Specialization and Intensive Training in Young Athletes” in the September 2016 issue of Pediatrics hits the mark and provides concrete evidence that early specialization in NOT the optimal pathway to either elite performance or health and well being.

The AAP report along with the Aspen Institute’s Project Play, I “hope” will begin to shift the discussion and beliefs about youth sport participation and structure 180 degrees away from winning/performance to fun and enjoyment and development.  In January 2015, the Aspen Institute released “Sport for All, Play for Life: A Playbook to Get Every Kid in the Game,” a 48-page report that offers a new model for youth sports in America, with eight strategies for the eight sectors that touch the lives of children.

The cultural shift has to start with sport parent and coach education.

I comment this in this piece titled “As competition rises, team sports decline, but traveling teams soar WCCO-TV”.

The The Aspen Institute’s Project Play is also mentioned.

Project Play focuses on access to quality sport opportunities for children ages 12 and under. “Sport for All, Play for Life: A Playbook to Get Every Kid in the Game (2015),” is a 48-page report that offers a new model for youth sports in America, with eight strategies for the eight sectors that touch the lives of children.

I LOVE and DISLIKE that 13-year old Philadelphia-based pitcher Mo’ne Davis is creating a stir in the 2014 Little League World Series (LLWS).

LOVE: It is creating awareness that girls can and do play baseball, and can pitch and play successfully against boys. Davis is throwing like a girl–athletic, competent, knowledgeable, competitive.

DISLIKE: Lots of girls outperform boys every day in a variety of sports and it shouldn’t be a big deal and certainly not create a national media event…it should be common knowledge. At 11-13 years-old (the age of LLWS players), developmentally girls are usually ahead of or similar to most boys in height, weight, strength, speed and power. Thus it makes sense Mo’ne and other girls can “hang with the boys” or outperform them. As colleague, Olympian, and Women’s Sport Foundation advocacy director Nancy Hogshead Makar posted: “Way to go Mo’ne Davis! At the same time, there’s too much awe and disbelief that a girl can be a truly outstanding athlete – Especially pre-puberty, where there are very few physical differences. If you’re “AMAZED” – you need to see a lot more female athletes.”

LOVE: The public gets to SEE Davis pitch/bat/field, and SEE her on the cover of Sports Illustrated. Being seen on two of the biggest sports media conglomerates–ESPN and SI--matters. Being seen communicates what is relevant, important and valued. Davis provides visible proof of a performance continuum in sport and communicates positive messages to young girls about athleticism that transcend gender.

LOVE: Mo’ne Davis has become a role model for both girls and boys alike.

DISLIKE: I don’t think children in any sport should be on ESPN at all. Period. It is exploitation pure and simple. It teaches and sends children the wrong message about what sport should be about. If you’ve watched any of the LLWS, it doesn’t take long for the kids to find the camera trained on them and catch them looking into the camera…instead of focusing on the game at hand. It creates scrutiny and pressure on youth athletes, a pressure that not many youth are equipped to cope with yet. How would you like your failures to be broadcast on national TV when you were 12 yrs old? In addition, it is rumored that Davis signed gear is being sold for big money…none of which will benefit HER (else her future college athletic eligibility be nullified).

LOVE:  I think it is really cool that Davis appears on the cover of Sports Illustrated, and is also the first Little Leaguer to appear on the cover. Groundbreaking! I like that she is portrayed in action, in her uniform and on the field…markers that communicate athleticism and competence. I love that the coverage of her has increased interest in (record TV ratings, long lines for tickets, merchandise sales, stories written about) and respect for young female athletes.

DISLIKE: ESPN rarely covers girls’ and women’s sport (See this study) and Sports Illustrated rarely puts females on the cover (Go to SI covers and count for yourself! or read one of numerous studies about it) and when they do females are sexualized rather than portrayed as serious athletes, but now that showing Davis will increase ratings and sales she is hyped and promoted. Seems like more exploitation. (Note: it would be really distasteful to sexualize a 13 year old on the SI cover!)

The popularity and hype around Mo’ne Davis is complicated. Images of her are both empowering and transformative, but can also be read as exploitative and regressive. This is what makes sport such an interesting context to examine. What do think?

Here are 3 pieces everyone should read/watch/listen to, which reflect 3 areas of research I frequently write about and are currently HOT TOPICS—sport parents,  women in sport coaching, and media portrayals of female athletes.

1. The Problem for Sports Parents: Overspending, a Wall Street Journal piece that outlines the more parents spend on a child’s “sport career”, the more pressure the child may feel. You can also listen to a radio show on this topic out of Boston. While you’re at it, read a Boston Globe article titled “How parents are ruining youth sports: Adults should remember what athletics are really about”

2.  Basketball’s Double Standard, by espnW writer Kate Fagan is about the barriers and

discrimination that women coaches face in college basketball, and how women coaching men’s teams seems laughable to most ADs. You can see just how bad the numbers are pertaining to the percentage of women head coaches of women’s teams at “big time” institutions by clicking here.

3. Watch Dr. Caroline Heldman’s TED talk titled “The Sexy Lie” which is helps dispel the “sex sells” myth. In my research at the Tucker Center for Research on Girls & Women in Sport, we are amassing evidence to help dispel and challenge the myth that “sex sells women’s sport.” You can watch our documentary on this topic “Media Coverage & Female Athletes” free online.

Hear my radio interview with Jim Dubois of Access Minnesota, as we discuss issues related to the decline of in the percent of women in coaching, the Report Card on College Women Coaches, coaching career pathways, and a host of other issues related to women in the coaching profession.

Read the piece I wrote for Minnesota Hockey on this topic, by clicking here.