Some and colleagues and I are working on research pertaining to what is known (and mostly not known) about the role of youth sports in obesity prevention. Last week Toben Nelson, University of Minnesota’s School of Public Health, presented some of our work at the monthly Tucker Table. You can view his PowerPoint and see a small video clip. This work has made me think critically about how youth sports may not be the healthiest places for some children–including the ubiquitous presence of unhealthy snacks which I wrote about in an earlier blog. While physical activity and active living may help prevent childhood obesity, healthy eating is the other half of the equation. To highlight the relationship between physical activity and the presence of unhealthy food, this Village Voice post and picture showing how NYC playgrounds house soda machines says it all (via AN).

For those who may not know, here in the U.S. we have a President’s Council for Physical Fitness and Sport. This group according to the government website “is an advisory committee of volunteer citizens who advise the President through the Secretary of Health and Human Services about physical activity, fitness, and sports in America.” Many of my Kinesiology colleagues have served on the PCPFS council and its Science Board. It is an honor to be asked to serve this prestigious group. The PCPFS puts out many informative publications, research digests and other pieces that can be downloaded free on the PCPFS website.

Historically, the Executive Director is someone who is well respected and academically trained in sport science yet understands how to apply and implement research-based best practices to improve the health, nutrition and well being. President Obama has recently named the new Executive Director: Sergio Rojas (for his bio click here and here). No disrespect to Mr. Rojas, but is he qualified? With a BA in Psychology from Loyola, I couldn’t help but think this rings of Chicago-based nepotism.

With the health of US citizens in the forefront of the national debate on health care reform, the alarming incidence of childhood obesity in US children, low rates of physical activity, and the fact that pressure to meet No Child Left Behind standards has basically ensured that physical education is stripped from school curricula despite rising evidence that physical activity increases cognitive functioning and classroom achievement, some of many health issues that face our nation, the PCPFS needs a strong and informed leader. I doubt that Rojas is the guy to help move these issues in the right direction, I hope I’m wrong.

picture from Institute of Health Economics

I can’t promise this won’t be the last, but TIME’s front page coverage—a usually reputable and fair minded news source—of “The Myth About Exercise” still has me thinking.

I have a few more thoughts on this matter after reading some responses to the “Myth” article in TIME’s Letters to the Editor.

In the Aug. 31, 2009 issue, TIME published The President of the American College of Sports Medicine (ACSM), James Pivarnik’s, letter to the editor in which he calls out the uneven and untrue reporting in The Myth About Exercise article. The ACSM also published a position statement motivated by the TIME article, in which experts within the ACSM took “strong exception to assertions that exercise can inhibit weight loss by over-stimulating the appetite.” In the position st

What struck me about Pivarnik’s letter was the irony.

How many people read Pivarnik’s letter compared to the millions who read the “Myth” article? The expert, scientific perspective gets 50 words buried on p.6, while the “Myth” story gets front cover exposure, and multiple page, full color feature coverage. Even if you didn’t read the article, you might of read the headline while standing in line at the grocery store—which might be enough to create misinformed perspectives.The exposure of a TIME cover story cannot be underestimated—a major weekly news magazine tells the public what is newsworthy, valued, important….and true (even when the “truth” is skewed, misinterpreted by a journalist, or just plain NOT true).

Every Saturday I look forward to the TIME magazine in my mail. I know I can read it all online, but there is something satisfying about print media. As someone trained in sport science (aka, Kinesiology) this week’s cover story by John Cloud “The Myth About Exercise” intrigued me. After reading it, I was more than surprised, a bit irritated, and wondered if this wasn’t just more sensationalistic journalism. The premise of the article was based on “some recent studies” that found exercise does not help one lose weight or isn’t as important as we’ve been led to believe.

What?! Have we been lied to all these years? A friend who regularly works out read the article and promptly said, “THAT was depressing and made me never want to work out again.” I wondered how many others were thinking similar thoughts.

The TIME article, based in part on the findings of ONE clinical trial, found that in a group of 464 overweight women assigned to four conditions—women who exercised did not lose significantly more weight than those who did not exercise…and some women in each of the four conditions gained weight.

Dr. Timothy Church, Chair of Health Wisdom at LSU and lead author of the clinical trial, outlines the process of exactly how exercise might psychologically work against us:
1. exercise stimulates hunger
2. when we exercise we often “reward” ourselves with food [see my blog post about this issue in youth sport]
…or both. My astute friend mentioned previously, pointed out this premise assumes that those who don’t exercise don’t reward themselves with food.

Cloud offers an additional explanation based on another study with UK children he’d written about earlier this year
3. One might be more sedentary during non-exercise times than if one didn’t exercise at all

At first read, these findings and the TIME article may be perceived as a green light to bolster couch potato status, and only pay attention to what you eat–and this is dangerous. Exercise matters…but more importantly researchers have demonstrated movement matters!

If you take in more than you expend, you gain weight. Given that our metabolism slows 10% every decade (i.e., meaning you burn 10% less calories/energy), even if you ate exactly the same as you did as a teenager…you’d gain weight. True, exercise is only HALF of the equation, but a still needed half.

With billions of dollars tied up in the health and diet industry and new products and advice generated daily, I’ve joked for years that I’m going to write a one-page best seller—Move More, Eat in Moderation (© 2009 nmlavoi). Alas, I fear this would not be a best-seller nor make me enough money to become a full time blogger….Americans want the easy route, the quick fix, and watching what you eat and factoring movement into one’s daily plan takes a bit of effort.

TAKE HOME: The research cited in the TIME article is mostly one-sided, although it does raise some interesting questions. Many other researchers have found that exercise/movement IS important, can lead to a host of positive outcomes, and can provide a buffer to chronic diseases associated with obesity. This is a perfect example of why a critical perspective can be valuable….so…off the couch!

To promote healthy eating, and active living in a society in which obesity rates continue to grow, attention to both is critical. This well-placed article in a well known weekly magazine may do more fan the flame of weight loss mythology, than help.

p.s. The tired gendered cliché of “woman running for something sweet” on the cover did not escape notice

UPDATE 8/10/2009: To prove my point about sensationalist health journalism, today a University of Minnesota colleague Gary Schwitzer, a longtime health journalist “sounded the alarm this week after analyzing hundreds of medical news reports from the past three years” in an article in The New York Post.

Did you know that researchers of the University of Minnesota have found that sitting down as a family at the dinner table appears to play an important role in promoting healthful eating in kids? Among children ages 11 to 18 who eat meals with their family consume less snack foods, higher amounts of fruits, vegetables, grains and nutrient-dense foods than those who eat separately. Additionally, family meals are related to healthy weight control (and less prevalence of eating disorders for girls. More on the girl-specific findings here), better academic achievement (GPA), and less substance abuse in children. 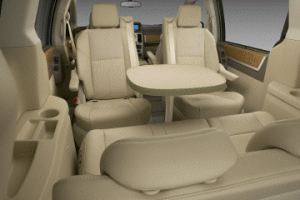 However, sitting down at the family dinner table is not a reality for many families involved in youth sports (especially with multiple children!). This week my college tennis teammates got together with our families for a picnic. One of my friends with 3 children in youth sports all under age 10 said, “I don’t even know what sitting down at the table together looks like anymore! This is our dinner table (pointing to her “cooler” that looked much like a giant padded purse).” So it got me thinking—

Do the benefits of family meals ONLY accrue when families sit down together at the dinner table? From some data I’ve been collecting, 15% of youth sport parents report youth sports “never” interfere with family meal time, and 7% report it “frequently” interferes—leaving a majority of parents to claim it “somewhat” interferes. Is the mini-van the new dinner table for families involved in youth sports? I feel a future research project brewing…

I’ve been thinking about snacks at youth sport events since last summer. Why?—primarily because when I asked youth sport parents what made them “angry” at their child’s sport events, snacks came up with some frequency. We thought, “Snacks? Anger? Really?” At one point we dubbed it “Snack Wars”….too many snacks, not enough snacks, the wrong snacks, who is bringing the snacks?, and who is in charge of organizing the snacks? We were quite surprised (and amused) by this emergent finding. I need your help in thinking through this issue. Why have snacks become such a common and ubiquitous part of youth sports? When did this start and why? What is your opinion about snacks at youth sport events? Leave me a comment and enlighten me. In the meantime, watch this “McDonald’s Victory” commercial on YouTube…this is what I’m talking about! What message does this send youth athletes?