I’ve been wanting to write a blog about this topic for awhile and a recent interview given by my colleague and the Director of the Tucker Center for Research on Girls & Women in Sport Professor Mary Jo Kane on the Edge of Sports Radio with Dave Zirin provided me with a perfect opportunity!

In the interview with Zirin she discusses research, conducted with Heather Maxwell (Ph.D.), in which their findings refute the idea that sex sells women’s sports. Kane also discusses how the notion of “sex sells” is related to depictions of motherhood and female athletes—like the magazine covers of Sheryl Swoopes and Candace Parker pictured here, homophobia and Pat Griffin’s idea of The Glass Closet, and her thoughts on the Women’s Final Four sport media coverage. (Note: Motherhood and elite female athletes is a popular blog topic lately..see Maria Hardin’s blog and the Pretty Tough blog) 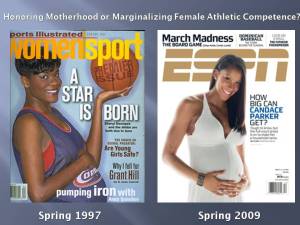 I also think Kane’s interview helps us think through why some female athletes feel it is important to “have it all” (i.e., be sexy, feminine, AND athletic)…which I’ve touched upon in a previous blog about social media.

The interview is less than 5 minutes and well worth your while to hear one of the leading experts on sport media, Title IX, gender, and women’s sports talk critically and share cutting edge research. In the end, as Zirin says, “Sex sells sex“. Sex does NOT sell women’s sports.