If you haven’t seen the t-shirt Serena Williams sported in her post-match Wimbledon press conference, then you are missing out. 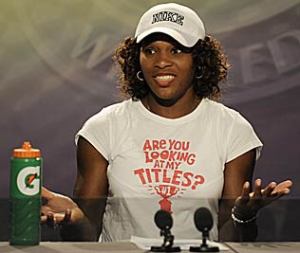 Given the attention to attractiveness, court assignments, body parts (i.e., “back packs”) sex sells women’s tennis controversy at Wimbledon, Williams clearly has the last say. Perhaps it was in jest, but the point of the t-shirt which contrasts her athletic achievements (11 Grand Slam Titles) with a primary focus on her body, mocks the attention given to the feminine, attractive, sexualized nature of the dialogue surrounding her (and other female athletes) play over the fortnight. To hammer this point home….Just think if Roger Federer wore shorts to his press conference with print on the front asking “Are you looking at my trophy?”