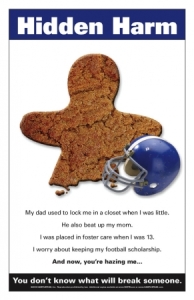 Every week I hear stories from across the country about hazing in sport contexts. The recent attention nationally around bullying, including a stand from the White House, illustrates the seriousness of these issues and that social change is necessary. Here in Minnesota a hazing incident involving a MN high school football team garnered a lot of media attention. Unfortunately, stories of hazing in high school and college sports is not uncommon. I teach a hazing unit  in my Psychology of Coaching class, so I’ve been thinking about this issue for some time.

I feel it is important to educate current and future coaches, parents and athletes that hazing has no place in sports (or any context!). Here are some of the reasons why hazing should not be tolerated, punished swiftly and severely, and not minimized as harmless “teasing.”  To hear me talk about hazing, you can watch an interview I did with Fox 9 News.

There are some great resources available about hazing including HazingPrevention.org and StopHazing.org

There are far better and more positive ways to build team cohesion, mutual respect and create positive relationships among athletes than hazing rituals.

One Reply to “Hazing Has No Place in Sports”