Recently U.S. Secretary of State Hillary Clinton delivered the commencement speech at Barnard College, an all women’s college located in New York City. Her speech had many good points, but there are two excerpts in particular which inspired this blog. First, Clinton states, “Marginalization of women and girls goes on. It is one of humankind’s oldest problems.” Given the dialogue generated around my past blog (and at Women Talk Sports) pertaining to whether Twitter is good or bad for women’s sport and if sex sells women’s sport, Clinton’s remarks about the use of social media are particularly relevant.

In her speech Clinton challenges the women of Barnard, and all of us indirectly, to use social networking tools to better the lives of girls and women. Clinton says, “But now, it [news] is beamed worldwide by satellites, shared on blogs, posted on Twitter, celebrated in gatherings. Today, women are finding their voices, and those voices are being heard far beyond their own narrow circumstances. And here’s what each of you can do. You can visit the website of a nonprofit called Kiva, K-i-v-a, and send a microloan to an entrepreneur like Blanca, who wants to expand her small grocery store in Peru. You can send children’s books to a library in Namibia by purchasing items off an Amazon.com wish list. You can sit in your dorm room, or soon your new apartment, and use the web to plant trees across Africa through Wangari Maathai’s Green Belt movement.

And with these social networking tools that you use every day to tell people you’ve gone to get a latte or you’re going to be running late, you can unite your friends through Facebook to fight human trafficking or child marriage, like the two recent college graduates in Colombia – the country – who organized 14 million people into the largest anti-terrorism demonstration in history, doing as much damage to the FARC terrorist network in a few weeks than had been done in years of military action. (Applause.) 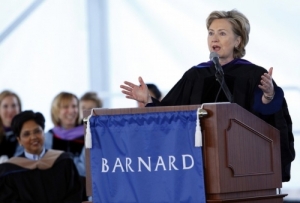 And you can organize through Twitter, like the undergraduates at Northwestern who launched a global fast to bring attention to Iran’s imprisonment of an American journalist. And we have two young women journalists right now in prison in North Korea, and you can get busy on the internet and let the North Koreans know that we find that absolutely unacceptable. (Applause.)

These new tools are available for everyone. They are democratizing diplomacy. So over the next year, we will be creating Virtual Student Foreign Service Internships to partner American students with our embassies abroad to conduct digital diplomacy. And you can learn more about this initiative on the State Department website.This is an opportunity for all of us to ask ourselves: What can I do?….no matter what you’re doing, you can be a citizen activist and a citizen diplomat.”

So while the jury is still out on whether social media is good or bad for women’s sport, how we might train female athletes to use it effectively, if female athletes can “have it all” (i.e., promoting sexy, feminine, yet strong athleticism) or if by doing so they are reproducing the same old gender stereotypes that undermine women’s athletics, or if sex truly does or does not sell women’s sport, we do know a few things.

Girls and women in sport, and unfortunately in many other contexts, continue to be marginalized. I invite everyone—women and men alike—who care deeply about sport and physical activity as a means for female empowerment and positive development, should reflect on Clinton’s remarks. How can we become “citizen diplomats” and use social media for the greater good of helping develop, grow and sustain women’s sports?

Note: As a related aside, when I was coaching Women’s Tennis at Wellesley College (’94-98), an all women’s college and the alma mater of both Secretary Clinton for former Secretary of State Madeleine Albright, the book store had a great t-shirt. On the front it said, “Wellesley trains women to be secretaries”…and on the back it said “Secretary of State”.